A woman in New York City was stopped at a traffic light in the Bronx when a crane, that was lifting a load of construction material, crashed down onto her car.

The department of buildings is now investigating.

Cruz, a Lehman College student who was driving to class at the time, described the accident as “happening slow and fast at the same time.”

She saw the traffic light being ripped down and anticipated something was about to happen, and she said a firefighter told her that if she had stopped 3 inches forward, she’d be dead.

Cruz said she’s very appreciative of the good Samaritans who came to her aid and opened the door, because she was unable to.

She was taken to St. Barnabas Hospital for treatment, but amazingly, she reportedly only suffered minor injuries, possibly from glass.

“It sounded like the World Trade Center,” witness Ticey Williams said. “I was standing there, and all the sudden, I was looking up, and I saw the beam pop, and it was coming down, it was like a movie. I was like, there’s no way this could be happening. So then when I heard the crash from the wall where it hit, and then the car, bam, I just knew someone was dead. But thank God the lady was alright. We snatched the door open and got her out.”

It appeared the boom broke off while lifting materials. The truck did not tip over.

“They were taking a payload up to the seventh or eighth floor above me when the crane boom collapsed across the road, fell on the car right behind me and injured one passenger in that car,” FDNY Deputy Assistant Chief John Sarrocco said. “She has, believe it or not, minor injuries. She is very lucky. She was in the car behind me, and the way the boom crossed the car, just missed her. She’s going to be fine.”

The building under construction appears to be undamaged.

Inspectors with the Department of Buildings are responding to the scene, and the FDNY evacuated approximately 29 workers from the site out of an abundance of caution.

Sarrocco said the cause of the failure is under investigation. 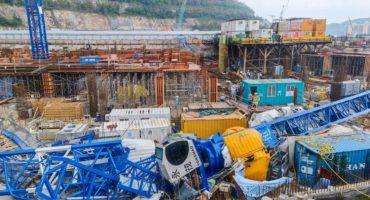 Three people have died while a further six were injured... 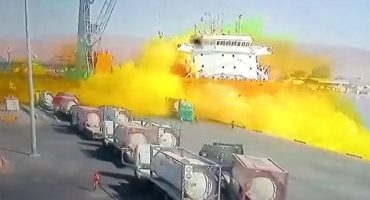 A port crane loading choline containers onto a ship at ... 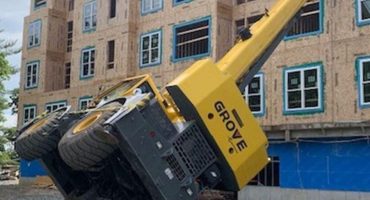 A Rough Terrain crane overturned sideways on to a five ...

Guideline for Crane Stability and Ground

What do crane Engineers do?

Potain cranes do the heavy lifting on Mi

How To Become a Crane Operator